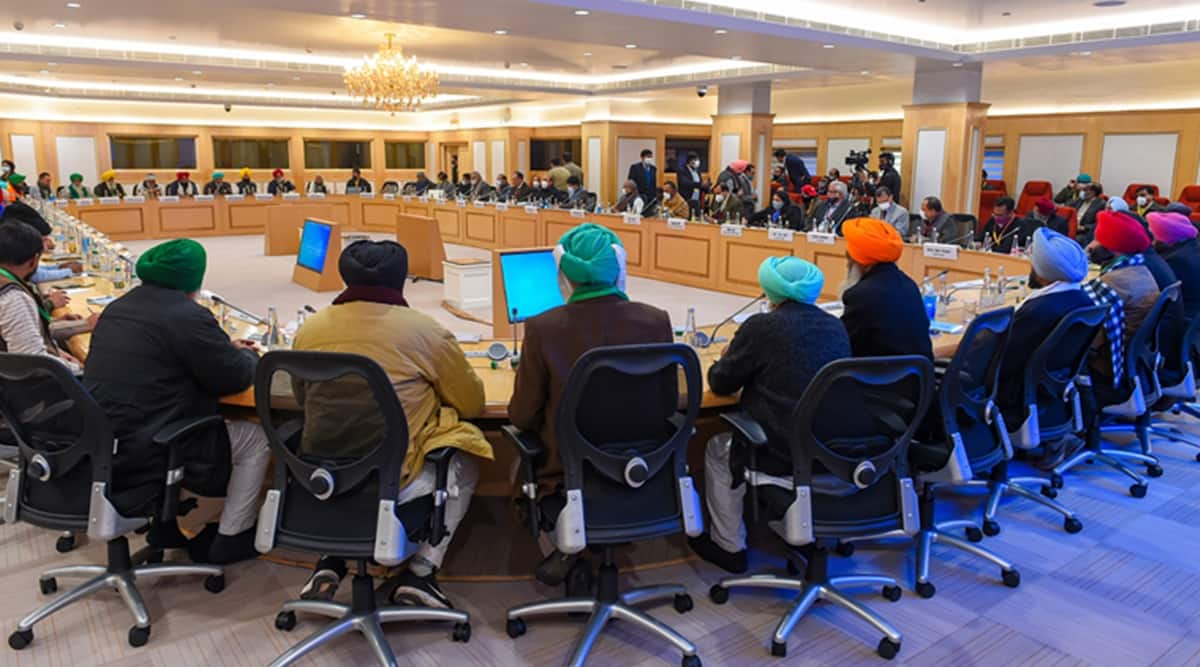 Making headway in talks for the primary time since farmers against the brand new agriculture legal guidelines confirmed up on the gates of Delhi greater than a month in the past, the Centre Wednesday stated there had been “mutual consensus” on two of the 4 calls for raised by the farmer unions. The two sides agreed to fulfill once more on January 4.

The Centre agreed to “decriminalise” stubble burning by excluding farmers from the ambit of the ‘Commission for the Air Quality Management in National Capital Region and Adjoining Areas Ordinance 2020’, and drop these provisions of the draft Electricity Amendment Bill, 2020, that are supposed to vary the prevailing mode of subsidy cost to shoppers.

There was no headway on the calls for to repeal the three newly enacted farm legal guidelines and supply authorized assure on the MSP or minimal assist value. These shall be mentioned when the 2 sides meet once more subsequent week.

Emerging from the assembly, Union Agriculture Minister Narendra Singh Tomar stated, “There has been mutual consensus (aapsi razamandi) between the government and farmer unions on two of four issues that union leaders placed for discussion at the meeting today.”

He stated union leaders needed farmers saved out of the ambit of the Air Quality Management Ordinance.

“The government told them that we are aware of their concern and both sides have agreed on this matter,” he stated. “Their objections were related to criminal action against farmers, we will decriminalise it.”

On the draft Electricity Amendment Bill, Tomar stated, “The unions demanded that the existing system of power subsidy paid by the state to the consumers should continue. Mutual consensus has been reached on that demand as well.”

“There were four points on the agenda. Out of these, aapsi razamandi (mutual consensus) has been reached on two — or 50 per cent. The meeting took place in a very pleasant atmosphere,” he stated.

“Unions have been demanding the repeal of the three farm laws and we have tried to tell them that the government is ready to discuss provisions on which farmers have problems,” he stated.

A ministerial committee, headed by Tomar and in addition comprising Food Minister Piyush Goyal and Minister of State for Commerce and Industry Som Prakash, represented the federal government aspect within the talks whereas the farmer unions despatched 41 representatives – this time, the addition was the forty first consultant: BKU common secretary Yaduveer Singh Malik.

During the assembly, sources stated, authorities representatives proposed a committee to deliberate on the calls for of the farmers concerning the three farm legal guidelines. But farmer leaders didn’t comply with the proposal.

Commenting on the end result of the assembly, Samyukt Kisan Morcha chief Darshan Pal stated, “The meeting is not 50 per cent successful, it’s only 25 per cent successful as consensus has emerged on two smaller issues while the two bigger issues still remain unresolved.”

Joginder Singh Ugrahan, BKU (Ugrahan) president, stated: “When we started the meeting, we were not hopeful, but as the talks proceeded, they agreed to two of our demands. However, our main demands of repeal of farm laws and purchase of crops on MSP are still pending. These will be discussed on January 4. Finally, something positive has come out of these talks.”

Jagmohan Singh Patiala, BKU (Dakaunda) common secretary and dealing committee member of All India Kisan Sangharsh Coordination Committee (AIKSCC), stated: “The central government is bowing to public anger. This is the reason that they have agreed to take back the proposed electricity Act, and also not include farmers in the criminal offence provision in the environment Ordinance. On January 4, they will talk on our main demands for repeal of farm laws and purchase of crops on MSP. We are all united and determined… considering the positive gesture of the government, we have postponed the tractor march of Samyukt Kisan Morcha to January 4.”